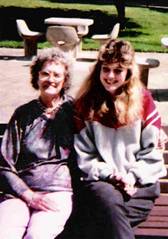 My mom, in the picture above sitting next to me, was diagnosed with Alzheimer’s in 1996. Her condition progressively deteriorated, and in 1998 she could no longer stay at home. I did not have the ability to provide Alzheimer’s care for her on my own, so she had to go into a nursing home.

While she was in the nursing home, I would visit her in the evenings. During these visits, I noticed that many of the other senior residents were often agitated and did not cooperate well with the staff. I envisioned a fun recreation program to keep them occupied and get them laughing, so I proposed an idea to the Director of Recreation. My idea was to run a program on a volunteer basis consisting of fun, mentally stimulating activities. My program was approved, and was named Reminiscing of the Golden Years. Examples of the activities included:

· Trivia
· Word exercises
· Bringing in old record albums and discussing the artists and playing music
· Discussing current events and opinions on them
· Discussing movies, actors, and their history; then perhaps watching a video that they starred in

My mom passed away in January of 2000, but I continued to run the Reminiscing of the Golden Years program until late 2001, when I decided to go to school and become a New York State Certified Nursing Assistant (CNA) so that I could better help the residents of the nursing home. I decided to do this because I continually witnessed the understaffed situation in the nursing home and wanted to contribute to the health and well-being of the residents more than I could from my volunteer program. In early 2002 I received my New York State CNA certification and began my employment with the nursing home.

After working in the nursing home for a while, it became very clear to me that residents did not receive enough 1-on-1 personalized care or mental stimulation. I also noticed that some residents seemed to have an attitude of giving up since they were forced to go into a nursing home.

I decided that I wanted to do more to keep seniors at home in a familiar environment as long as possible, so I started my own business, Affordable In-Home Care.

I hope we can get to know each other better, and I hope I can help you or your loved one stay at home by providing you with exceptional senior home care services.